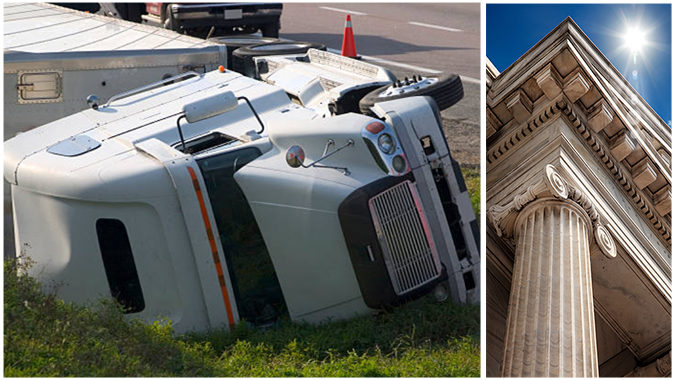 In this course you will learn the safety regulations and standards frequently relied upon in these cases. Experienced truck crash plaintiff and defense attorneys will discuss the initial steps that must be taken to preserve critical evidence, digital data, and documents. You will learn how to identify potential defendants and theories of liability. Pre-trial discovery, motions, and evidentiary considerations will be discussed.

Attorneys will learn about the different theories of liability in trucking cases and how to identify all potential defendants. They will also get a list of the key documents needed in every trucking case and strategies for conducting discovery. Finally, most trucking cases require experts, and the program will discuss various types of experts and when they are needed.

He obtained his Bachelor of Arts degree from the University of Illinois at Urbana-Champaign in 1991 and Juris Doctorate from Valparaiso University School of Law in 1994. Mr. Bradley is admitted to practice law in both Indiana and Illinois, before the United States Supreme Court, and various lower federal courts.

A sustaining member of the American Association for Justice, Mr. Bradley is strong advocate for the rights of those injured and in the interests of improving safety whether on the nation’s highways or elsewhere. He is a sustaining member of the Indiana Trial Lawyer Association where he also serves on the Board of Directors and is a College of Fellows inductee. Mr. Bradley was one of the first thirty-five lawyers in the United States to qualify to be Board Certified in Truck Accident Law by the National Board of Trial Advocacy. Mr. Bradley is also a member of the Illinois Trial Lawyer Association; Attorney’s Information Exchange Group; Million Dollar Advocates Forum Life Member; a Life Fellow of the Indiana Bar Foundation; and serves on the Board of Regents for the Academy of Truck Accident Attorneys.

Mr. Bradley is a contributing author to Truck Accident Litigation, Second and Third Editions, published by the American Bar Association. Mr. Bradley is retired from the United States Army Reserve Judge Advocate General Corps and is a graduate of the Army Command and General Staff College, US Army Airborne and Infantry Schools. He has spent his entire legal career representing those who have been injured or killed due to the negligence of others. Mr. Bradley has never represented companies or corporations in defense of those parties. In his free time, he can often be found outdoors with his wife and their pack of rescued German Shepherds and a Siberian Husky.

Jay was born in Louisville, Kentucky. He received his undergraduate degree from Murray State University in Murray, Kentucky in 1999. Jay graduated from Salmon P. Chase College of Law at Northern Kentucky University in 2002. He is licensed to practice in both Kentucky and Ohio.

Jay has received Martindale-Hubbell’s esteemed “AV” rating, which recognizes lawyers with the highest ethical standards and professional ability. Since 2013, he has been named to the Kentucky Super Lawyers, which recognizes no more than 5% of attorneys in Kentucky. Since, 2020, Jay has recognized as one of the Top 50 Kentucky Super Lawyers. Jay has tried numerous cases ranging from automobile collision cases to complex catastrophic injury and death cases. In 2021, Jay along with his partner, Ron Johnson, obtained a $74,000,000 verdict against a paving company for negligently completing a road project resulting in the death of a mother in front of her children.

He is asked to speak both locally and nationally to other lawyers having given over 120 presentations on a variety of legal topics. Jay is currently serving on the Executive Committee as President-Elect for Kentucky Justice Association and is very active with both the American Association for Justice (AAJ) where he is the current Vice Chair for the Traumatic Brain Injury Litigation Group as well as serving on the Executive Board for AAJ’s Trucking Litigation Group and the Board of Regents for the Academy of Truck Accident Attorneys.

Jay focuses his practice on commercial motor vehicle, car wreck, personal injury, traumatic brain injury, and wrongful death cases. He is one of the first 10 Board Certified Truck Accident attorneys in the country, which is an ABA-accredited certification through the National Board of Trial Advocacy. Jay understands that his clients have had their lives turned upside down due to the fault of someone else which is the reason for him working tirelessly to achieve justice for his clients, help make up for what was taken from them and giving them hope for the future.

A Fellow of the American College of Trial Lawyers, Carl has tried more than 80 civil cases to verdict in Illinois, Indiana, Maryland, New Jersey, New Mexico, New York, Ohio, Pennsylvania, Texas and Washington, and has been admitted pro hac vice in over 30 state and federal courts.

Carl is the leader of Hinshaw’s transportation practice. He has represented American trucking companies and European, Asian, and American product manufacturers in their lawsuits throughout the United States, served as national trial counsel for a management services company and several consumer services companies, and acted as national product liability supervisory counsel for a consortium of international amusement ride companies.

In 1985 and 1986, Carl tried 10 straight cases to defense verdicts, the streak coming to an end in a hung jury on a wrongful death case. His trial record has continued into the second decade of the 21st century where he has prevailed in over 70% of his cases tried.

In addition to his academic accomplishments during law school, Carl was an active moot court participant. He was a member of the National Moot Court team and also served on the Moot Court Board. While attending the University of Illinois as an undergraduate, Carl became a member of Phi Beta Kappa, Omicron Delta Kappa, Delta Sigma Rho-Tau Kappa Alpha and Phi Eta Sigma fraternities. He was on the Dean’s List all four years.

Session II – Theories of liability in trucking cases and how to identify all potential defendants | 1:10pm – 2:10pm